The calm before the not calm.

About two decades ago, my friends and I were neck deep studying for comp exams for our master’s degrees. Plus we had to teach on the day before Thanksgiving (though few students bothered to show up), and those who had family out of town just couldn’t spare the time to travel. We were stuck in town over the holiday.

So I decided to cook Thanksgiving dinner and invite folks over to my one-bedroom apartment that had a 24″ two-burner stove, about 3′ of counter space, a tiny refrigerator and a kitchen table large enough to comfortably hold three people. I can’t swear to it, but I think there were six people crowded in.

That was the year I discovered – while carving the bird – that inside was packed a paper packet of gizzards and the neck. Ah well – the turkey still tasted good, or at least didn’t make anyone sick.

I started doing a big dinner here 11 years ago – and always at 6 p.m. or later, so that those who had family in town could eat two turkey dinners, with time for a nap in between (and so I didn’t have to get up at the crack of dawn to preheat the oven). 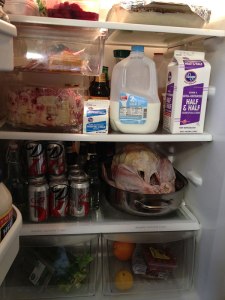 Trifle, potatoes and turkey…and out of room.

I’ve had as many as 18 people crowded around the big table and an auxiliary kids’ table in the front hall. That’s a lot of fun. It’s also a lot of dishes. This year, only six people are expected for dinner (though I’m still cooking for 20 – sometimes people just show up). I expect others will come by later for drinks (you’re invited).

In case you do show up, note the one and only Thanksgiving rule:  THERE WILL BE NO SQUABBLING.

To those who couldn’t make it this year, we’ll miss you. (Don’t worry – I’ll eat your portion of trifle.)

That’s what I’ll be doing in about 9 hours.