A Rough but Productive Weekend 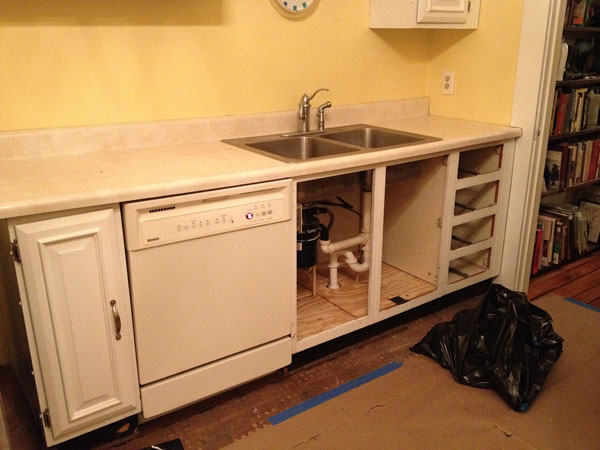 At 7 a.m. Friday, I ran the old dishwasher one last time.

I’ve been working on my kitchen almost non-stop during my waking hours (which feels like most of them in the last 72) since 7:30 a.m. on Friday. My friend and neighbor, Jason, was off from his day job as a chef on Friday, but before he went back into restaurant and catering world, he was employed by a general contractor. So Jason can do just about anything that needs doing – and he can lift heavy stuff (countertops) and – perhaps most important – he’s a genial guy and easy to work with. (And did I mention he can lift heavy stuff?) 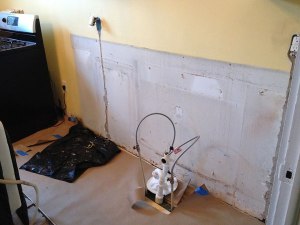 That wall has more hills than central Kentucky.

As I drank my coffee (for which I used the old sink to fill the pot for the last time), I began tearing out the old cabinets around the dishwasher and pulling up the last of the tile and hardboard underlayment – then pulled 200 more staples from the floor. (I still can’t recommend fencing pliers heartily enough!)

Jason showed up while I was unloading the dishwasher (into the living room, as one does). We disconnected the old machine and sink, and moved them aside (OK…I threw the sink in the backyard for now; the dishwasher went to another neighbor). Then out came the hammer drill and there went the cats. Jason cut channels for conduit and GFCI plugs in the plaster-0ver-brick wall; I went shopping.

No, not for yet another pair of black boots; I needed a faucet, because the old one wouldn’t work in the new sink. Fastest sale ever. I walked in to Keidel’s, looked around for three minutes and said, “I’ll take that one in brushed nickel and a new strainer and baffle for my disposal.” (Really, it was defensive shopping – I’d scoped out online what I wanted…and knew I had to run a gauntlet past Aga cookers and Thermadors to get it. So pretty! So exorbitant! So never going to be able to afford! So, not worth salivating over.)

As soon as I returned, I got busy on the cabinet bases. After a fair amount of struggling in vain and an enormous number of expletives, in the end I had to settle for damn-near level instead of level. There’s only so much a girl can do when floors and walls exist not in the usual three but in an apparent five dimensions. (No really – I am wholly convinced there is some electromagnetic force interacting with gravity and pulling things into configurations that were once but theoretically possible. I concede that force may exist only in my kitchen; I should charge extra for it.) 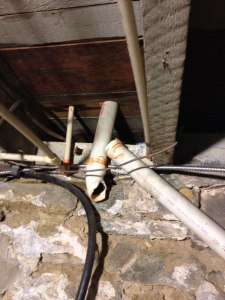 Then we ran into a little bit of trouble. Game over for the day; there would be no new sink on Friday (poor me; I had to go up to the kitchen sink on the third floor – which used to be a separate apartment – to fill the tea kettle).

So then Jason went shopping (for PVC, purple primer and PVC glue – which is not nearly as exciting as shopping for shiny faucets).

Saturday, bless him, Jason actually came back. With his help, I got the butcher block onto sawbenches so I could cut it to size (damn is that thing heavy) then notch out the corners for the sink’s apron. With the counter and sink installed, Jason hooked up the water lines and opened the valves, I grabbed the handle and…Yay! 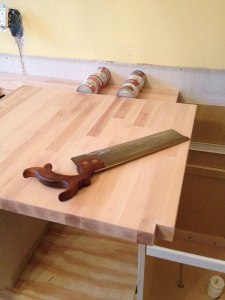 I’ve never before been so delighted to see running water. Silly, I know, because there remains an immense amount of work to be done (and almost all of it from this point on by me…not least of all because Jason has probably blocked my number), including (but not limited to, I’m sure) the upper cabinets (though all the pieces are cut and stacked up on my bench), face frames, doors, drawers, hinges, drawer slide installation, hardware, the cork floor…

But a stream of water out of a new faucet into a new sink feels like real progress. I actually once again have something that looks and functions vaguely like a kitchen – and already, it looks a damn sight better than the old one.

Today, Jason finished up the electric for the most part (but for a broken fuse; thanks Home Depot – 10 minutes work later this week whenever) with new junction boxes and cutoff switches for the to-be-installed Tuesday dishwasher and the once again working disposal.

As he worked in the basement, I applied the first of many coats of mineral oil on the countertop, which will be eventually be followed by wax…and here come the “you should have used X” comments; please be gentle, I’m exhausted. 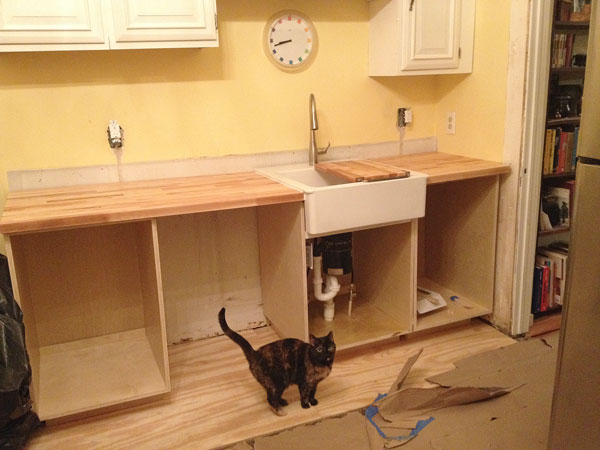 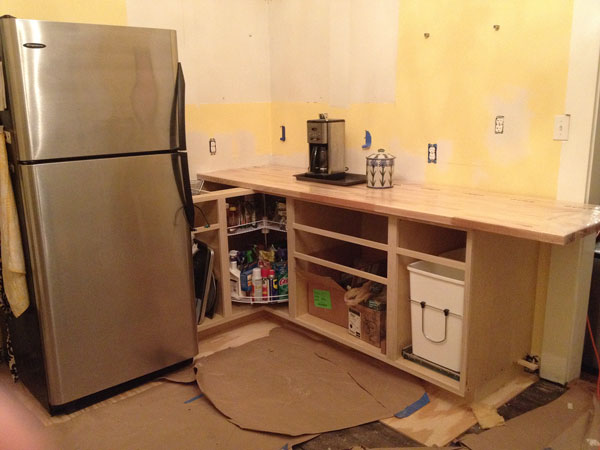 Oh right – I made a little more progress on this wall, too.

9 Responses to A Rough but Productive Weekend