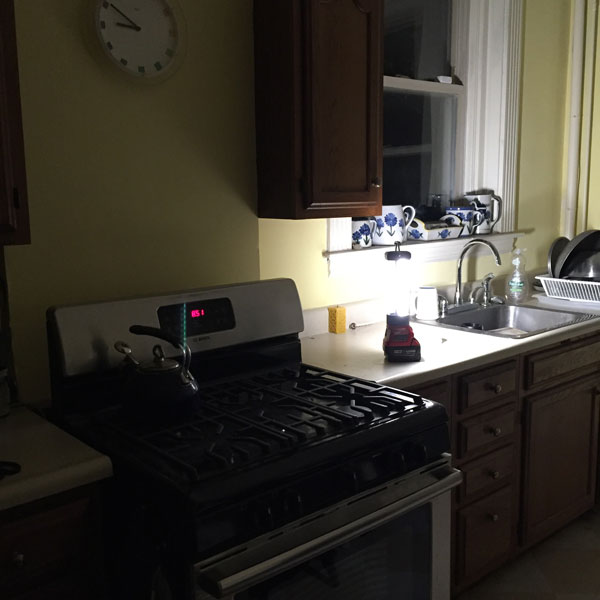 My house is in massive disarray right now, with wires sticking out of switch boxes and ceilings, holes in the plaster (some intentional, some not) and lifted floorboards that my cats are treating as a new playground. I have light in only a couple rooms, and random working plugs.

My stove works, only because I ran a new (and dedicated) circuit for it a few months ago; ditto on the refrigerator. But there is no light in the kitchen at the moment, and I can’t be bothered to move the stove or fridge to plug in a floor lamp. Instead, I’m relying on the Milwaukee Tools 18V LED/Flood Light ($79 at Home Depot, bare tool only).  I’ve been carrying it with me from room to room, and using it to read in bed at night (no light in the bedroom, either, and no working plugs).

Though I hope to rely on it for only one more night before the new circuits are in place and my electrician puts in temporary lights (donkey d*&k lights, I think he calls them?) until I can get the plaster fixed, this lantern is pretty cool. The base swivels and moves the bulbs so it lights a 360° area, or the bulbs can be pointed all in one direction for use as a task light. And, it has four settings; at the full-blast setting (700 lumens), I’ve gotten just more than 17 hours off a full charge. (One of those four is a strobe setting, but I’ve not had a dance party to test that.) It has a split handle on top for hanging, though I’ve been just sitting it on the base.

So if you’re in the market for a battery powered light (with a USB port, to boot), I recommend taking a look at the Milwaukee (particularly if you already have one of their 18V batteries and charger); it’s worked well for me for the past week or so.

Tim (the electrician), tells me that by tomorrow, all the wires poking out the walls and ceilings will be neatly tucked away, properly grounded and hooked up. Then, it’s on to patching the plaster (I’m going to give the walls a go, but hire a plasterer for the ceiling work). Oh, and nailing back down the floorboards – properly – after adding a few supports where a long-ago owner made some bad cuts, leaving a few boards unsupported.

The cats will be devastated. But at least I’ll be able to stop worrying about losing them under the floor. 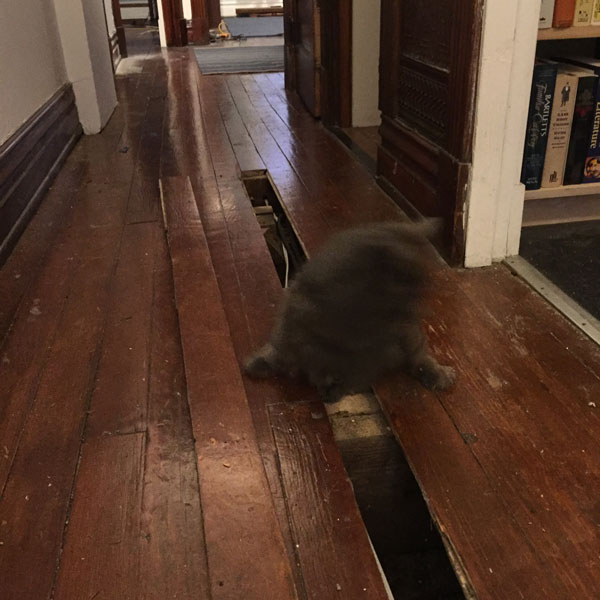 10 Responses to Lighting by Milwaukee

Sculptural Woodwork made by Chris Wong on Vancouver Island, BC