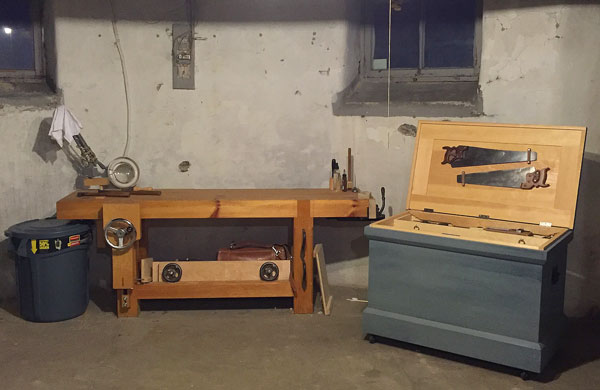 Now to do something about that phone panel…

Were I strictly a hand-tool woodworker, I could call my shop done.* I finally made the tills for and attached the wheels to the chest I built in December 2012/January 2013. The tool rack on the front chest wall has been done for three years, so I’ve been using it to store chisels and backsaws, and my planes have long been stored on the chest floor. But my measuring and marking tools, and all the other stuff that should go in tills? Those have been stored in various boxes, on countertops, in drawers, in pockets…in other words, I’ve had a heck of a time finding what I’ve needed over the last year.

So I did something about it.

With the wheels added, the chest no longer fits in the back of my Subaru. But unless it’s empty, I can’t lift the chest anyway, so that doesn’t really matter.

After flipping the empty chest on its top to attach the wheels, I flipped it back, leaned against it and promptly fell on my backside. The wheels work. Now I have to get used to them.

The three white pine tills are dovetailed at the corners…and some of those joints even look good! (I have Raynaud’s and it’s been acting up lately…I blame the bats. That’s made it difficult to grip a saw or do anything else that requires fine finger control. It’s also an excellent excuse when necessary for cutting crap dovetails.) While The Plan calls for oak till bottoms, I used walnut for the top and middle ones. Because that’s what I had.

Instead of fitting the tills tight to the chest walls as Christopher Schwarz directs in “The Anarchist’s Tool Chest” (I really don’t think I could have done that easily with no feeling in several fingers) I used a trick he mentioned in a blog well after the book was published – the tills are a bit undersized from left to right (particularly the middle one; my stop slipped), but the bottoms are snug (thank you shooting plane).

My woodworking tools are now out of boxes/bins/bags/tubs/pockets/etc. and in the chest where they should be. My construction (and destruction) tools are all on shelves. And the tools I rarely use (Grandpa’s 1″ gouge, for example) are still in boxes, but I know which box and where it is.

Now that I can find everything at a glance (except for my favorite birdcage awl…no idea where that is!) I’m wholly out of excuses to not finish the front stairs. Well, except that I can’t grip a hammer at the moment. But as soon as it warms up and stays warm, that will pass. Then I’ll probably come up with a new excuse.

Those filled up fast. I think I have more than the “50 or so tools you need” (from the gospel according to Chris).

* I’m not strictly a hand-tool woodworker, so I still have some machinery to set up…and some I still need to buy.

Woodworker, writer, editor, teacher, ailurophile, Shakespearean. Will write for air-dried walnut.
View all posts by fitz →
This entry was posted in Woodworking. Bookmark the permalink.