Don’t Worry (& Call Me if Old Yeller Shows Up)

This little guy was masquerading as a gargoyle on my dresser last summer.

In the last couple days I’ve posted on social media about (more) bats in my basement, and a video of a bat flying around in my stairwell. In the last year (mostly over the winter when a few little buggers would wake up briefly to find a way into my living space to seek out some water), my close friends have heard me complain about late-night bat evictions at least 15 times. A lot of folks have warned me publicly and privately about the possibility of contracting rabies. My mother begged me to move out until the bats were removed (and volunteered to pay for a long-term hotel). Good thing I declined; it would have been awfully pricey. It’s been more than a year since I moved in and despite having taken measures to remove them, I and at least some bats are still sharing the place (I gotta think that at least some of the colony – or colonies – are gone, given said measures).

I truly appreciate the concern, but you needn’t be worried.

Yes, one can contract rabies from bats – though the disease in bats is rare. The most recent reliable stats I could find (in 10 minutes of Googling…dogged and trained researcher that I am) is that about six percent of bats in the U.S. might have the virus. It’s hard to say definitively because in order to test for it, the bat has to be caught and killed (and it is illegal in Ohio to kill bats without exigent reason). I am against killing things (other than cockroaches and spiders) unless I plan to eat them (and I’d much rather buy my meat than hunt it). May I never be so hungry as to have to eat a bat (or a cockroach or a spider).

That said, the overwhelming majority of human rabies cases are caused by bats…but that’s an average of two cases per year in the United States over the last two decades. Two cases per year out of a population of almost 319 million. The odds are in my favor.

Bats eat a metric sh*t ton of bugs. They pollinate flowers and crops. They help to disperse seeds. Guano is an excellent fertilizer. An extract from their saliva is being used in tests for an anticoagulent drug (named Draculin, natch). They entertain my cats – though only one cat, JJ, has managed to catch a bat. (More on that in a moment.)

I am not afraid of bats; I even find them kinda cute. 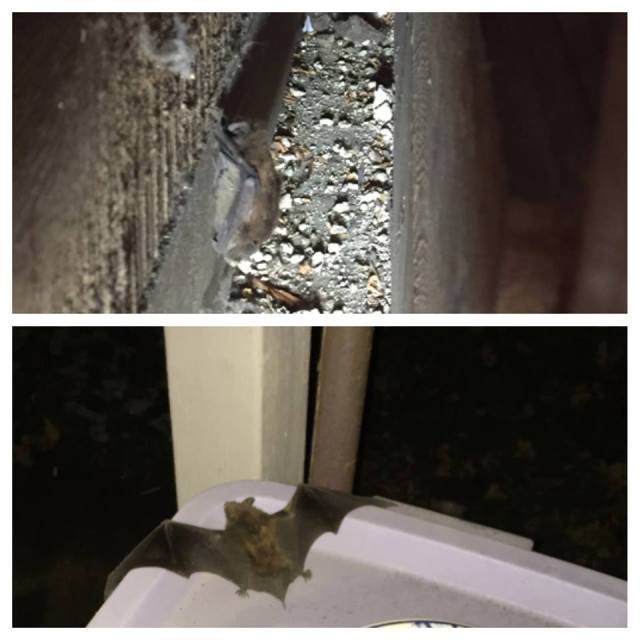 This little guy was hiding in the pocket door pocket (top). I trapped it with a bowl and piece of cardboard (yes I had on thick leather gloves), then took it outside. After a few minutes’ recovery, it disappeared into the night…and possibly back into my eaves.

Still, it is undeniably alarming to wake up at 2 a.m. in the dead of winter with bats zipping around one’s bedroom.

This spring, after the hibernation period but before the breeding season, I hired an expert to perform live exclusion measures. (Had I known before the hibernation period last fall that the bats were residents rather than inadvertent visitors who fell down a chimney or what have you, I’d have done it then). Bat man clearly has a bit more work to do – though not until after any possible pups have learned to fly (trapping them inside the walls, eaves, or wherever they are would be disastrous). That will be around August 15.

The bat mitigation costs have thus far totaled about $1,100 (I’m ignoring the possibility of future bat sh*t cleanup; I can’t smell it so it isn’t there!). But my total bat cash outlay is now closer to $4,000. That one bat JJ caught in late March? In trying to get it away from him, I got swiped with a claw. Or a tooth. I do not know which, or whose. Better safe than sorry (and dead). But the shots? Now there’s a damn good reason to be scared of bats. Warning: Stop scrolling now if you’re squeamish; the extra space below is on purpose.

This was the first visit’s worth of shots. There were three more similar visits in the following 14 days.

Even with decent insurance coverage (for which I consider myself lucky), I still had to pay about $3,000 for the full series of shots. It was not exactly out of pocket, because I am generally healthy and thus had enough in my HSA to cover all but a very small portion. But I now have no medical safety net. Must. Be. Careful.

After recovering from at-times debilitating neuropathy and weird pupil-dilation issues that went on for about 10-12 weeks (I am 100 percent sure the neuropathy was/is from the shots, though my doctor is skeptical; I sorta believe him that the eye thing might be unrelated, but the timing is suspect), I’m pretty much back to normal. My fingers and toes are still a little tingly at times, but I can once again hold a hammer, so all good.

But I’ve developed an aversion to needles.

I haven’t written about this (just posted bat pictures) because I’ve considered approaching the former owners (who were landlords and did not live here) to cover the costs of the mitigation and future guano cleanup…and possibly some of the medical costs (though arguably, those are my own stupid fault). They did not reveal “bats” on the disclosure forms; according to a former tenant, the owners were aware of a bat problem. I’m told by that tenant that the owners took steps themselves to address the problem rather than seeking professional help (if so, it didn’t work).

I’ve decided not to.

I can’t find anything in Ohio law that addresses whether or not one needs to disclose bats, and I don’t know how long the statute of limitations is. That is, said tenant, who lived here long-term, can’t recall when he told the former owners (and there is no record of his having told them). If it was, say, five years before I bought they place and the owners thought the problem was fixed (it wasn’t), did they have an obligation to disclose? (Had they done so, I’d have hired an inspector experienced in bat detection.) No one among my lawyer friends and family members knows personal real estate laws of Ohio well enough to offer informed advice. (I would have disclosed it. I disclosed every “problem” I knew about in my former house, legal obligation or not. There are moral obligations.)

While I realize I could simply ask the former owners about it, given the pictures I’ve posted on Facebook over the last year and our many mutual FB and actual friends, there’s simply no way they haven’t seen or heard that I have an ongoing bat problem. So maybe they truly didn’t know there was one before I moved in.

But I hate confrontation, and there is no clear legal path forward. It would be a they said/I said situation (with but hearsay to support my claim). And here’s the thing: I’d have wanted the place anyway (though had I known about the bats, I’d certainly have asked for and expected a price reduction or allowance to at least cover the mitigation and future cleanup costs). So yeah, I’m disappointed; I just don’t know with whom.

But the most important things are: a) I am on the right side of the “2 in 319 million” equation; b) my hands are once again fully functional; c) I’m available to hire for all your rabid animal removal needs (all fees will be deposited to my HSA).

Woodworker, writer, editor, teacher, ailurophile, Shakespearean. Will write for air-dried walnut.
View all posts by fitz →
This entry was posted in Personal Favorites. Bookmark the permalink.

Sculptural Woodwork made by Chris Wong on Vancouver Island, BC