Changes (Good Ones) for Me 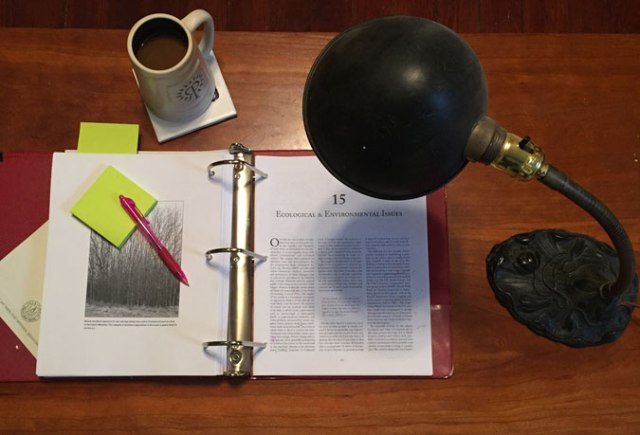 “Cut & Dried: A Woodworker’s Guide to Timber Technology” by Richard Jones. After editing the last few chapters on Sunday, I handed off the binder yesterday to Kara Gebhart Uhl, the managing editor on this project.

I enjoyed a delightful lunch yesterday (Otto’s – yum) with Christopher Schwarz and Kara Gebhart Uhl as we discussed changes at Lost Art Press (LAP), about which Chris posted yesterday on his blog. I’ve copy edited books for LAP for more than a decade, tucking that work into my available time – so late nights and weekends. Now, I’ll be doing that and more during the work day and work week…but I expect I’ll still work a lot of late nights and weekends; it’s in my nature.

I’ve been working pretty much non-stop since I was 16; this year, I’m turning 50. I’ve had many bosses in my 30+ years of employment, and Chris has been by far the best among them. We share a lot of the same interests (I like Shakespeare quite a bit more than does he, and he likes Russian novels; I do not. But that’s a minor disagreement), the same work ethic (though he has more energy) and many of the same ideas about how things should be done (most of which I learned/stole from him).

Now, I’m working with Chris again more closely, and I could not be more grateful to him and John Hoffman for it, and to Kara for welcoming my increased involvement.

But I don’t actually have a new boss, per se (unless you count my cats…who have long had that role); I get to work not with my boss, but with my good friend. When Chris left corporate America, he vowed to never again have or be an employee, and I wholly empathize. The small but dedicated cadre of editors, designers and researchers who work with John and Chris at LAP are freelancers/contractors. I’m happy to have more freelance work that I love, and glad that my increased involvement will free up Chris to research and write more – from that, we all will benefit.

In addition to my work with LAP, I’ll still be writing (it’s weird to be on the other side of pitches after 12 years as a magazine editor!), building furniture, teaching and doing other freelance editing (including an expanded role at Mortise & Tenon Magazine, for which I’m also thankful), along with a few personal projects that have long been on the back burner.

That door closing/opening saying? While I can’t bring myself to willfully use a cliché, that one would be apropos.

14 Responses to Changes (Good Ones) for Me