My small and lightweight basement Roubo.

In my basement, I have a “petit Roubo” – a 5-1/2′-long bench I made in….2011? It’s perfectly nice, if a little lightweight. I made it out of pine sourced from Craigslist – leftover stock from a log cabin build. It’s short (and lightweight) because my former shop was on the second floor of my house; anything longer couldn’t make it up the stairs. Now, I have room for a 9′ bench – and it wouldn’t be too hard to wrestle a behemoth bench down the outside stairs to my basement shop (it’s a straight shot).

At the shop I work out of most days – Lost Art Press – there are seven bench forms (and nine benches total), including mine, the “Gluebo” I built with Christopher Schwarz in 2009.

My “Gluebo” in the Lost Art Press shop. The form is similar to a traditional French bench, but the material (LVL) and bolts (it knocks down) are wholly contemporary.

I like both of my benches and they have served me well…but after spending a week at Wyatt “Bo” Child’s place in Georgia for the third French Oak Roubo Project (FORP), I want to build a new old-style bench, then sell one of my current ones (probably the little Roubo, then I’d move the Gluebo to my basement).

I’d love a heavy, solid-wood bench that’s about 9′ long and 18″ wide…and I have a new Benchcrafted Glide and Crisscross vise just waiting for a bench on which to install them.

It sure would have been a lot easier to build one in Georgia – with all the industrial equipment Bo put at the disposal of Jameel Abraham and Father John Abraham, the organizers of the event – than to build one at home (plus, I won’t be able to get my hands on 200-year-old slabs of white oak).

But alas, I was there as an “enthusiast” (it’s not a school, so the helpers were not “teachers”) to help assist the “participants” (not “students!”) as needed and help out with milling lumber and whatnot, not to build a bench. I had a great time, but I was itching to get my hands on a chisel and start whacking out mortises…on a bench of my own. Below is a look at the fun. Unfortunately, I had to head home before the benches came fully together – but I’ve seen plenty of evidence on Instagram that the benches got done.

Day one – folks are getting settled, and gathering their parts. 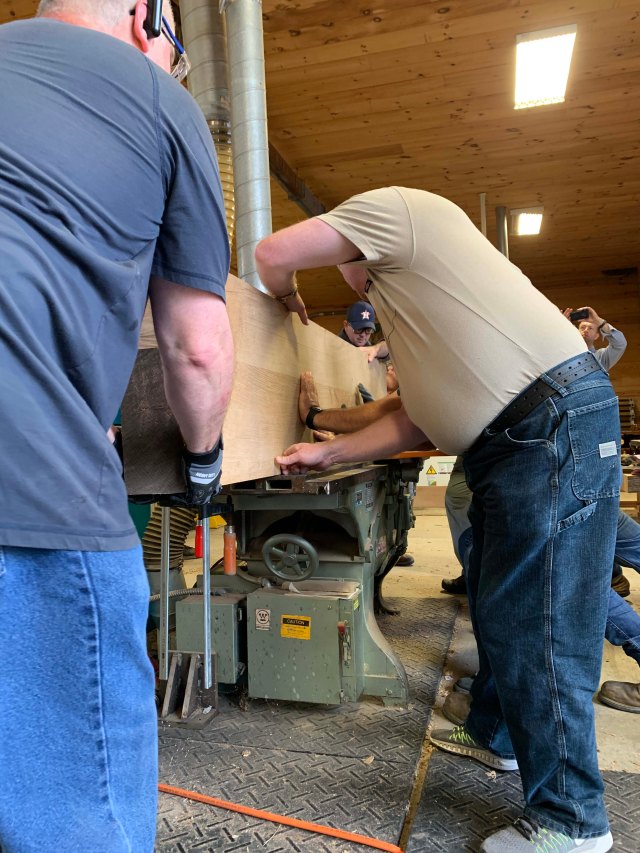 Jointing the front edges on the benchtops – it takes a village.

First undercarriage to go together.

Drilling out waste in a leg mortise,

Drilling out waste in a leg mortise…with a much larger drill.

Christopher Schwarz shows the group how to transfer the leg joinery layout on the underside of the top to the top side. 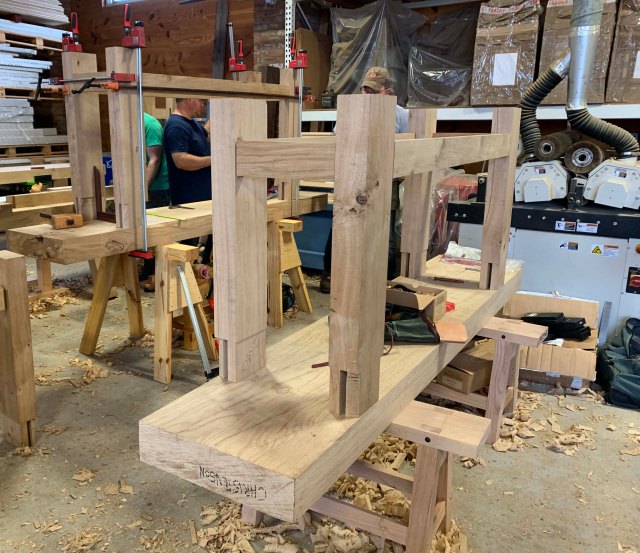 Transferring the joinery from the undercarriage to the underside of the tops.

Smoothing the bottom of a dovetail slot.

Removing a leg after a dry-fit.

Making off with Matt’s good bourbon. No, this was not the best part of the event…but it was a pretty good part…

Eternal thanks to Jameel and Father John for inviting me along for the ride, to Bo Childs for his hospitality, to Chris for letting me cadge a ride, and to all the other enthusiasts and participants. What a great week!

p.s. To see some of Bo’s incredible machinery, check out my upcoming post on the Fine Woodworking blog – it should be live on or around October 28.