On the Naming of Parts

My bathroom renovation is the last major project above the first floor, so with but a few cosmetic things to take care of therein before I can call it done (and before I show it finished), I’m resigned to finally rebuilding my front staircase. There’s no other large items to move up the stairs, and thanks to Wyatt “Bo” Childs, I now have some gorgeous reclaimed Southern yellow pine out of which to make the two bottom stair treads; I’ve no excuses remaining for leaving the staircase balustrade-less.

So I’ve been delving back into my books about period staircases…even though I don’t really need to know how to actually build a staircase (which is good, because there is quite a bit of math involved). The steps themselves are in fine structural condition, and it’s quite obvious from the back stairs and the remaining original handrail and spindles in the second-floor hall as to how the thing should go back together. I even have a good idea of what the moulding that caps the closed string should look like, thanks to a neighbor’s almost identical (but less remuddled) house. And I know how to swing a hammer. But darned if I can find anything written about the method used in my house to affix the balusters – even though it seems to be a fairly common arrangement.

Maybe there’s nothing written about it because it’s too obvious to need instruction? The balusters are housed in a wide groove on the underside of the handrail, and are simply nailed in to the handrail at the top and into the close stringer at the bottom. In between them on the underside of the handrail are simple rectangular pieces of wood nailed in place to fill the void in the groove between the balusters. At the bottom, there are faceted pieces of wood nailed between the balusters, directly to the closed stringer. A wide piece of moulding (I believe that’s called facia) is applied on both sides to hide the butt joints of the balusters and little pieces between (and to cover the rough surface of the stringer).

Oh look – more dust! You can sort of see here the underside of the handrail and the little blocks that go between the balusters at the bottom – especially given that the moulding isn’t nailed in place to cover their edges.

I’m not all that concerned about doing it (except for getting the balusters turned), but it’s bugging me that I can’t find the proper name for some of the parts – notably, the little faceted pieces. But George Ellis’ “Modern Practical Stairbuilding & Handrailing” is no help, nor is “A Treatise on Stairbuilding & Handrailing” by W & A Mowat. And while Peter Nicholson is credited with devising a mathematical system for designing/building stairways and handrails, he doesn’t get into affixing the balusters (and my house is 100 years younger than “Mechanic’s Companion” – the method used here may have come after him.) 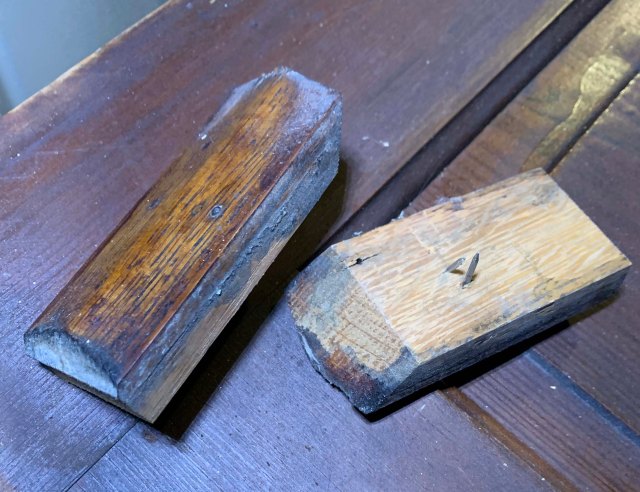 Surely there is a technical term for these? (And yes, more dust!)

I also have several late-20th-century books on staircases – but they have nothing on traditional approaches (and a lot on using construction adhesives).

So if there are any experts on historic staircase building who are reading this, do you know what the little spacer blocks are called? And can you point me toward a book or other resource that discusses this construction method? If not, I suppose continuing my search for relevant reading material will do nicely as procrastination.

23 Responses to On the Naming of Parts