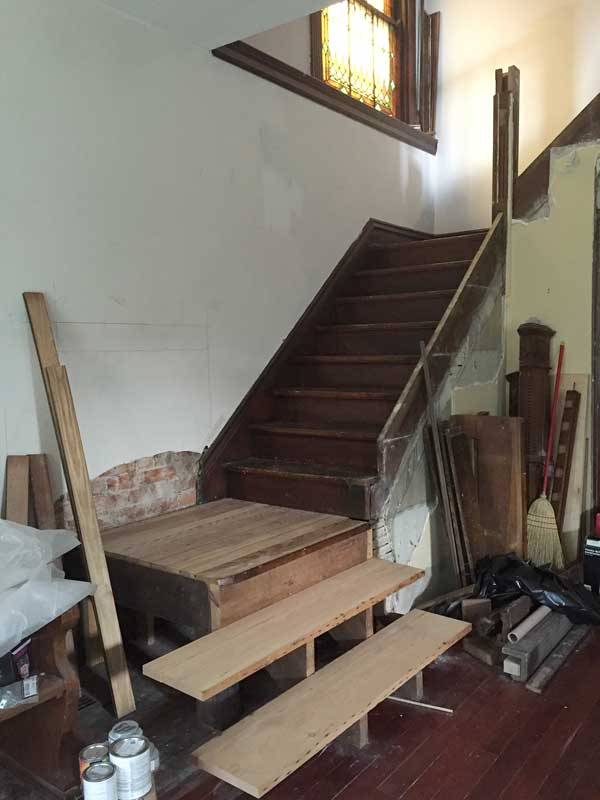 At the Lie-Nielsen Toolworks 35th-anniversary open house last weekend, almost everyone with whom I talked asked one thing: How are the stairs coming along? Those who didn’t ask about the stairs asked about the house in general. (Except for the one guy who wanted to know if Roy Underhill was as funny in person as he is on TV. (Yes.))

The short answer, to both the stair and house question, is: slowly.

All I’ve really done (that’s worthwhile) on the stairs in the last month is to take one of the original 1-1/4″-thick bottom treads (that had been cut short in the 1950s, precluding its reuse as a tread in my “new” configuration) rip it to 5″-wide or so then cut a wide, 1/2″-deep rabbet on the back to use as the front 3/4″-thick floorboard on the landing, with the original profiled edge lipped over the front. (I have the original 3/4″-wide moulding that will butt underneath it. Eventually.)

Then I ran into a stumbling block: stupidity. To make the two bottom stairs that will curve on the front end and terminate into a bookcase at the front of the landing, I bought a couple 2″-thick joists that had been salvaged from a late 19th-century Covington, Ky., building, assuming they were Southern yellow pine – that’s typical for the period in this region. I should have paid closer attention. It is white pine. So I’ll use those treads to prototype the curves and lengths, then go back on the hunt for old SYP. 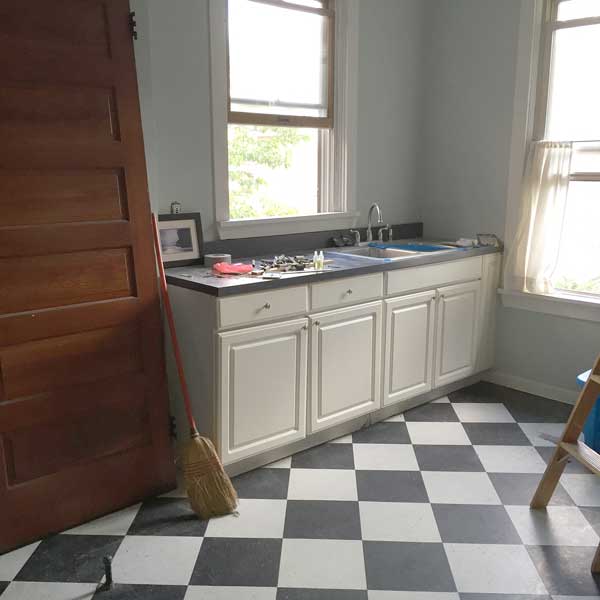 I took my frustration out in what was the second-floor kitchen (with the generous and muscular help of Christopher Schwarz – MDF cabinets are heavy!). I realized just before John Pater was scheduled to measure for the new windows that the one behind the sink couldn’t be right. And I was right. It was originally the same height as the one on the back wall, of course. (And will soon be again.) 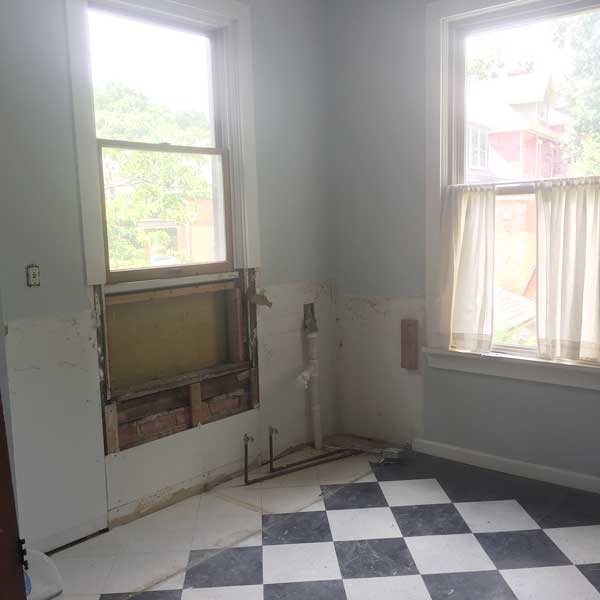 This room will, in the distant future, become a second-floor laundry room and guest bath. Until that day, I’m claiming the exposed plumbing is installation art. Like so much else in the place.

Woodworker, writer, editor, teacher, ailurophile, Shakespearean. Will write for air-dried walnut.
View all posts by fitz →
This entry was posted in Foyer, Renovation/Restoration. Bookmark the permalink.