Cauls – Fancy Cauls – to the Rescue!

For no particular reason, I decided to make some shelves for the bathroom on which to store towels, extra toilet paper and the like. Sure, on my to-do list there’s a hallway linen cupboard in which those things can eventually go (and for now they’re variously in bins under my bed and in the guest bathroom), but I wanted a little wood to warm up the black, white and grey of the bathroom, and open shelving provides me an excellent excuse to buy new towels for the first time in more than a decade.

Really, I just wanted to build something.

So I raided the stash of cherry in the Lost Art Press basement and took the worst pieces that were wide enough – stuff I didn’t think was likely to be used for anything else – then sized everything to match the available stock, as close as I could get to my napkin-sketch sizes. I had to make a few adjustments, but so what?

But “bad” wood can be a challenge.

I’ve done battle with the two side pieces before – and I lost. They came from some wide stock I’d bought about 18 months ago for a magazine project, and when I surfaced it (properly – I swear it!), it decided what it really wanted to be was a potato chip (a Pringle, to be precise). Yet I hauled it away when I left last December, so I had to use it.

So for this project, I ripped about 3″ off both edges to remove the worst of the cupping, then planed the remaining cup from the middle. But it still cupped (again!) a little bit, and ended up shy of 3/4″ thick. But oh well; towels don’t weigh much.

The challenge was how to pull out the cupping while using Dominos to join everything. I probably could have pulled it flat if I’d through-dovetailed the top and used sliding dovetails for the shelves, but with no PTO, well, I didn’t want to spend that kind of time. So I oriented the convex side out (of course), and planned to use cauls to pull everything tight during glue-up.

But Christopher Schwarz offered a better solution: fancy cauls (if Southern yellow pine pulled from the trash can be called fancy). After I cut the scrap to the same width as the sides (11-1/2″), he ran the first couple of inches of either end over the jointer to create a raised middle section (or, really, lowered ends) on each caul. 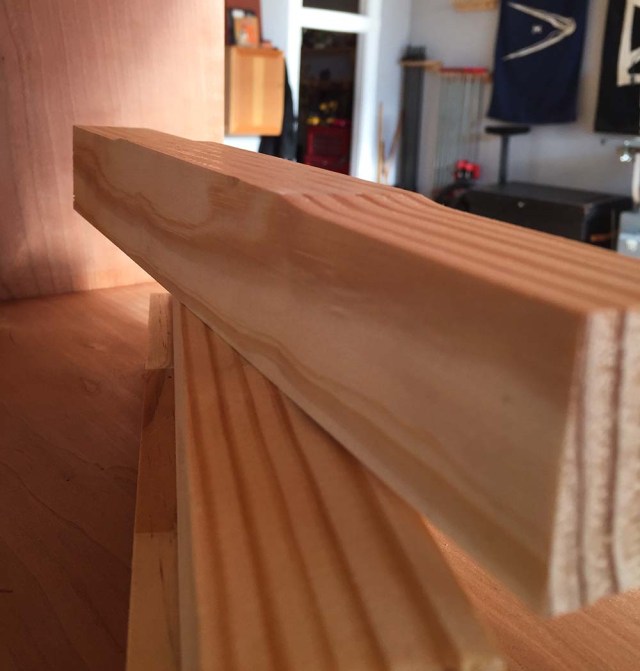 With those clamped under the cabinet clamp heads, it put the pressure in the middle, right where it was needed to pull everything tight and remove the cup while the glue set  (I left it in clamps overnight).

Today, I cleaned everything up with planes and sandpaper, then sprayed two coats of “Super Blonde” shellac (I typically use garnet, but the blonde was already in the spray gun), followed by a light sanding then another sprayed shellac coat. After an hour to let the shellac fully harden, I gave the shelves a rub-down with kraft paper to remove any dust nibs. Done.

(Pay no attention to the glitter glue; no, I didn’t really use that.)

Sure, it was a few-hours’ hooky from “real” work (about eight hours spread over a couple of days), but it was a joy to make something for myself that wasn’t on my to-do list, wasn’t a great necessity, didn’t have to be done by X date for a magazine shoot, was fast and fun, and that no one asked me to make. Glorious!

Woodworker, writer, editor, teacher, ailurophile, Shakespearean. Will write for air-dried walnut.
View all posts by fitz →
This entry was posted in Woodworking. Bookmark the permalink.

9 Responses to Cauls – Fancy Cauls – to the Rescue!